Liberty, Equality, & Justice for ALL
Tux-Lab Manufacturing Project
- A learned blockhead is a greater blockhead than an ignorant one. -
Benjamin Franklin 1737
Electronics 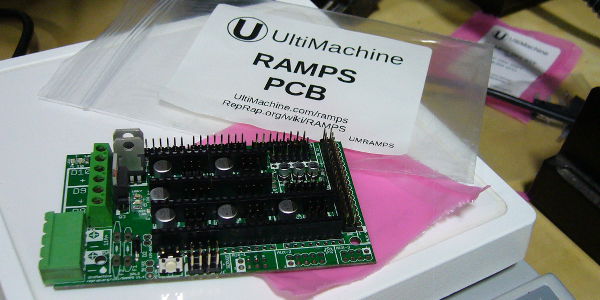 A new attempt to build a 3d printer using the delta mechanical design from Blue Eagle Labs with the electronic from UltiMachine. Like the previous version, a hot plate was used to solder the surface mount components.


Documentation on the Reprap firmware is a bit confusing with multiple unreferenced version. Following the installation instruction, the Sanguino Master Firmware was uploaded into Reprap Motherboard V1.2 via a Atmel STK500v2 through serial port. ReplicatorG was then installed and interfaces with the RepRap Motherboard through a Sparkfun USB-TTL board via a usb port.

It should be a fairly simple process, but there are a few versions of the firmware upload instruction each using a different version of the firmware. Before compiling and uploading each firmware, the bootloader must be burned through the Arduino IDE. . . . so it took a couple hours of trial and error to figure it out. I think the file reprap-mendel-20100702.zip contains the latest motherboard firmware and also the latest reprap interface, ie ReplicatorG. . . I think.


At long last the reprap electronics components are completed. The last stepper motor driver 2.3 has been reflow soldered along with the assembly of the 4 remaining OptoEndstops.

Using the stepper motor test program it seems that all the servo motors and optoendstops are running. 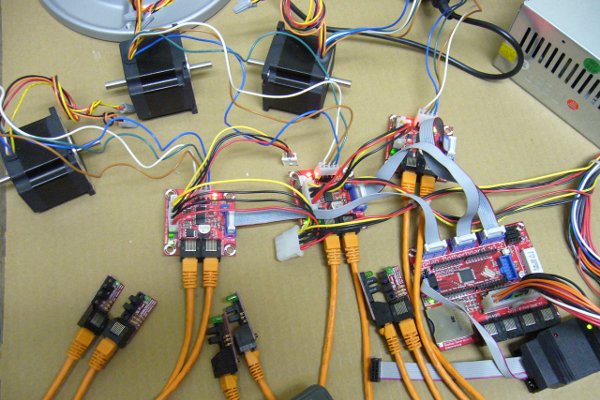 
I got a bit rusty after 6 month of inactivity. I started with the stepper motor driver. Sorting out the .22uf and the 1nf capacity took a while and I had forgotten to place the red and green led until the hotplate was already at ~202C and I saw the missing leds. . . Hastily, I turn the hotplace back on, placed the leds and added a dab of soldering paste onto each pad. Hopefully, I didn't overcook the whole assembly by tripling the soldering time. . . .

I was able to complete one motor driver board assembly plus two Optoendstops. 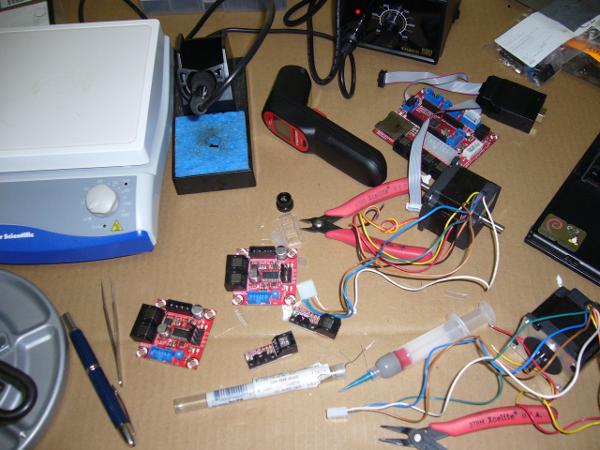 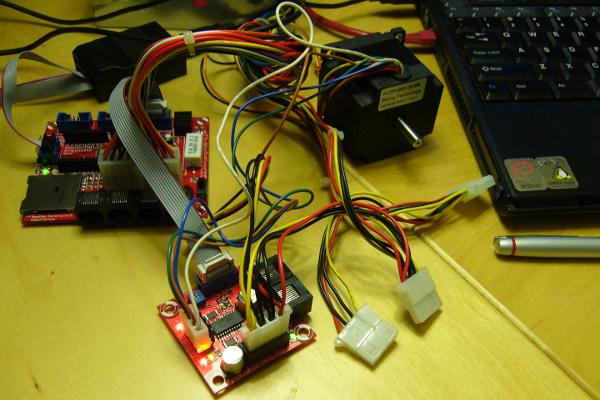 Wow. The Imperial March never sounded so good. Stepper Motor Driver works! The stepper motor driver test program was loaded into the Sanguino motherboard using USBtiny from adafruit. I switched from parallel STK200 programmer to usb based USBTiny programmer in hope of using the arduino IDE to upload the reprap firmware sketches however I am still having difficulties loading programs into the Sanguino motherboard using the Arduino IDE.

I did not know if the error is due to assembly/soldering error or from improper arduino IDE setting. Since I can view the ATmega644p setting and upload the bootloader with avrdude I lean toward a misconfigured arduino setting. I tried the reprap forum as well as googling for solutions, but still could not solve my problem. I came across a blog that mentioned improper baudrate setting and I started to experiment with different baudrate setting using avrdude. I found that only 115200 seems to work and other baudrate settings gave timeout errors similar to the error from arduino. I ended up inserting

into my arduino board.txt file and following the upload instruction with the obligatory reset the firmware loaded, the green power led lights up and I was able to turn the ATX power supply on with the reprap motherboard on/off switch. Wow!

Next is to test the stepper driver and extruder board 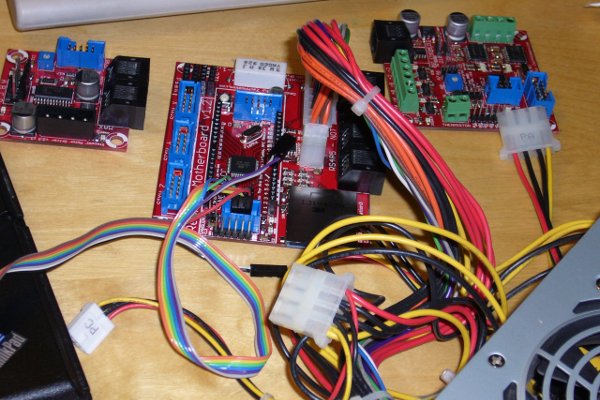 One of the three stepper motor drive V2.3 board along with motherboard V1.2 has been completed but I had trouble getting the Motherboard to show signs of life. I was able to load the bootloader through avrdude with a parallel port programmer from Sparkfun but could not get the arduino IDE to work properly. It took a while to convert the 10 pin isp to the 6 pin isp format, which basically was just remapping of the MOSI, MISO, VCC, GRD, Reset, and SCK.


I don't quite remember how I came across Atmel AVR microntrollers. Pre AVR days consists of handyboard, then some PLC kits, then a Basic Stamp kit, a smudge of embedded Linux somewhere in between, and finally the AVR days arrived. The concept of automation was always in the back of my mind but all of above ventures ended up gathering dust somewhere. Running Linux made things a bit more challenging, often beyond my meager skills and my short 30 seconds. 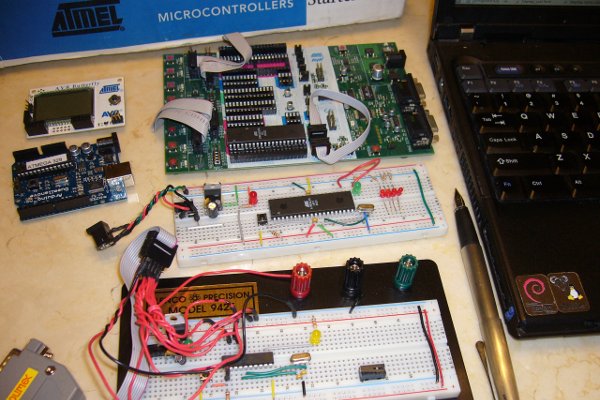 This image pretty much shows my tortuous and slow progression through various AVR incarnations. I started with STK500, then the C Programming Book for Microcontroller base on the AVR Butterfly, then Sparkfun's tutorials using the ATMega16, then a one day affair with Arduino through The Public School's Practical Electro-Mechanical class. Finally, with reprap generation 3 motherboard powered by AVR, I am going through Sparkfun's tutorial again but this time kind using the less expensive ATTiny2313. It's the least expensive AVR microcontroller with the external oscillator capability. Looking back I wish I had discover AVR sooner. It seem to be the least expensive but most versatile option.

Hopefully all the puzzle pieces will converge one of these days. . . .


Most of the parts for building the 3rd generation Reprap electronics have arrived and the cost of the mother board is listed below. Too bad Makerbot is out of stock on their motherboard kit because it took hours spanning several days to order, receive, sort, and group all the parts from three different vendors. . . . and this is just for the motherboard, I haven't even started kitting together the 3 stepper motor drive boards.